Any mention of the Drakensberg immediately brings to mind the imposing basalt cliffs and sheer drops along the eastern border of Lesotho where that landlocked country meets South Africa’s Kwa-Zulu Natal. Here it is at it’s most elevated and undoubtedly most impressive. The highest point of 3482m can be found close to the border just inside Lesotho at Thaba Ntlenyana.

For most people, this is all there is to the Drakensberg and they will be surprised to know that the range actually stretches for over 1100km. Part of the far bigger Great Escarpment, forming the divide between the low-lying coastal regions and the high plateau of inland Southern Africa, the Drakensberg towers over five of our nine provinces. From the Eastern Cape in the south, northeast through Kwa-Zulu Natal, touching the eastern Free State, up into Mpumalanga and finally ending in Limpopo. In each province that it passes through the Drakensberg accounts for the highest point of that province although often in a somewhat unspectacular way.

In the course of my journey I’ve passed along most of this range. I’ve already written about the Limpopo Drakensberg and will write in more detail about each of the other regions as I get to them. For now though, we’re visting the Mpumalanga Drakensberg and the spectacular landscapes created by this impressive mountain range.

Also known as Thaba ya Moholoholo (mountain of the very great one), the name Mariepskop comes from the 19th century chief of the Mapulana, Maripe Mashile. During the tribal wars of that time, this mountain with its sheer cliffs on almost all sides made for a very secure stronghold from which to defend against regular attacks by the Swazis and Zulus. The adjacent and well-known Three Rondavel peaks are named after three of Chief Maripe’s more vexatious wives – Magabolle, Mogoladikwe and Maseroto. The flat-topped peak overlooking them represents the chief himself.

Later, off-limits to the general public, Mariepskop became the site of an early-warning radar station for the defence force.

Drive to the summit

At the junction of three conservation areas namely the Blyde River Canyon Nature Reserve, the Mariepskop Forest Reserve and Mariepskop State forest this area is an unspoilt wilderness and the scenery is magnificent. As the mountain rises more than a thousand metres above the surrounding lowveld, the change of vegetation is dramatic. From hardy thorn-scrub at the bottom, through verdant rain-forests up to high altitude grasslands and fynbos at the top. This diversity results in a phenomenal list of more than 2000 plant species which far exceeds that of the entire Kruger National Park.

Heading west out of the small town of Klaserie, the drive to the summit is about 30km. The pass itself is only about 14km and gains 1100 metres over this distance. Although the road is very steep in some places, the most difficult upper sections are surfaced and can be driven by any car with enough power (and very good brakes for the return journey). The lower sections are gravel and some ground clearance is needed as the road is a bit rough in places.

About halfway up is the staff village from when the radar station was still active. Now mostly deserted, there is a controlled gate here and a small fee is required for a permit to proceed to the top.

Near the top of Mariepskop, a short detour to the Klaserie Falls is also well worth a visit and apparently an excellent place for a picnic but due to my car’s fuel gauge losing all sense of credibility on the steep gradient of the descent I did not dare venture off the main road.

Although I knew I had more than half a tank of fuel when I left Klaserie, I was suddenly shocked out of my euphoria created by the views when the dashboard lit up and informed me I only had 28km before I was to run out of fuel. I was still 30km from the nearest filling station! 500m later the 28km had diminished to only 20km! Another kilometre later it was now only 14km! Panic set in! What had happened to my fuel? Surely the steep climb couldn’t have used that much fuel? I fled down the mountain towards a filling station as fast and economically as possible without diverting to the falls.

Once down on the level, the fuel gauge suddenly regained it’s integrity. The red warning lights went off and I was politely informed that I now had a comfortable 240km to empty. But I’d lost my appetite for further adventure for the day and I headed meekly onwards. The Klaserie Falls would have to wait for another day.

My stay while in the area was at the large and well-known Swadini Resort. Situated deep in the valley below the Blyderivierpoort Dam and surrounded by the peaks of the Mpumalanga Drakensberg, this is a lovely place to stay. Normally I’m not a fan of large resorts but I enjoyed Swadini. The camp area is huge and there is plenty of shade. Being low-season, there was enough space to set up away from other campers. The resort is well-maintained as are all the Forever Resorts. There’s plenty to do for adults and children alike. There are enough ablution blocks to cope comfortably even in the busiest of times.

I only stayed two nights at Swadini before I left to explore The Backroads Around Sabie. 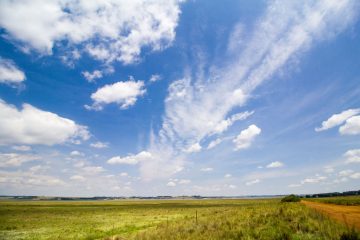 November 2018 Sometimes one passes through an area only realising afterwards how much one has missed. The south-eastern corner of Mpumalanga Province is one of those places. Leaving Eswatini, I first returned to Pretoria for Read more… Along the eSwatini Border

October 2018 After tea and freshly baked scones with relatives in Barberton and a fascinating morning exploring the Barberton Makhonjwa Geotrail, I turned south off the R40 a few hundred metres from the Josefsdal border-post, Read more… October 2018 After spending time in and around Sabie, I headed further south, passing through Kaapsche Hoop towards Barberton where I intended spending a few days. Unfortunately, Barberton seems to have no need for camping visitors Read more…