My first visit to Lesotho was an Easter weekend, I think 1984. Somewhere I’d read an article about this Mountain Kingdom and the name of one particular mountain pass caught my attention, drawing me in like a flame does to a moth. The pass was Lekhalo La Molimo Nthuse, translating from Sesotho as the God Help Me Pass.

I was the proud owner of a 1978 Land Cruiser FJ45 bakkie which, as is still the case with the modern Land Cruiser, was the epitome of 4×4 capability. I managed to talk a friend into joining me for the trip and his girlfriend decided she wasn’t going to miss out and invited herself along too. Armed with little more than the magazine article and an AA road map we set off, three of us crammed into the cab of the Land Cruiser, basic camping equipment under a tarpaulin on the back.

The plan was to enter Lesotho at the Maseru border, drive from west to east through central Lesotho and exit the country down the legendary Sani Pass. Nights would be spent camping under the stars. It was only 340km from Maseru to Sani and we had an entire long weekend in which to do it. Easy, we thought as we left the East Rand early Friday morning.

Four days later, as we slid our way down a frozen Sani Pass, we’d learnt a few fundamental lessons about travel in Lesotho: Firstly, never, never, never underestimate the weather here. The second lesson learnt was that travel in Lesotho is measured in time, not distance. The third lesson is to always carry more fuel than what you think you need.

Soon after getting our passports stamped and our beers confiscated at the Maseru Bridge, it started raining. Our destination for the night was Molimo Nthuse Lodge, only 63km from Maseru. It was still early and with a full tank of fuel we set off. Those days, the tar ended a few kilometres outside Maseru and from there it was gravel all the way across the country. As the rain poured down, our progress slowed as we splashed our way along the now mud-soaked road. After more than 12 hours on the road we finally arrived at our destination at around 8PM. Any thought of camping was abandoned and all we could think of was a nice hot shower and a dry, comfortable bed. Although the kitchen was already closed, the friendly staff re-opened and served us a delicious hot meal.

Early the next morning we set out towards the flame that attracted the moth – the God Help Me Pass. The rain had stopped during the night and progress was steady as we made our way across one spectacular pass after another. First up was Lekhalo La Baroa (Bushman’s Pass), a fairly easy one. Next was God Help Me, spectacular but fairly easy. A bit underwhelming for its dramatic name. The next big pass was Lekhalo La Thabo Putsoa (Blue Mountain). We were now at an altitude of 2600m and the Land Cruiser was feeling the lack of oxygen in the air. Down again to cross the Senqunyane River at 1825m before tackling the next big climb, the Cheche’s Pass, rising to 2553m.

After re-fuelling at Mantsonyane, memorable for probably the largest dump of empty beer bottles I’ve ever seen we traversed another two big passes, the Pass of Jackals and Mokhoabong before we reached Thaba-Tseka. We’d made good progress so far. It was late morning and we’d already completed about 120km for the day. Sani Pass was only 150km away, should be a breeze. So we thought!

No sooner had we left Thaba-Tseka than the rain came down again. Worse, the fairly good gravel road ended at Thaba-Tseka was now no more than a rough track, twisting its way through the mountains. It wasn’t long before we had to engage 4×4 and shortly thereafter we were down to crawling in low range. By about 3PM we crossed the causeway over the Senqu River (the Orange River in South Africa). We were only 30km from Thaba-Tseka and it had taken us nearly four hours!

Ever the optimists, we told ourselves the rain would soon clear and Sani Pass was still easily reachable by nightfall. Mokhotlong was only 80km away, if all else failed, we would spend the night there. We pushed on.

The innocent little red line on our AA map couldn’t possibly prepare us for what lay ahead. The magazine article which had attracted us to Molimo Nthuse ended at Thaba-Tseka so that was of no use. Lesotho was about to teach us some lessons.

After crossing the Senqu at 1770m metres the road steadily climbs to an altitude of just over 3000m at the top of Menoaneng Pass before it descends again to 2000m where it crosses the Sehonghong River just before Mokhotlong. In between these numbers is a never-ending roller-coaster of ups and downs. With the rain still falling in buckets, the track was now a muddy, slippery mess. We crawled along in low range and hadn’t gone very far before night fell. Crossing a small stream, the Land Cruiser lost traction and the back end slid frightfully towards the darkness. It was only a small slip but enough to make us realise that trying to push forward in the dark was madness.

So, here we were, three crammed into the front of a Land Cruiser, rain pouring and, for the second night, no hope of putting up a tent. It was going to be a long night! Luckily for us, the border official who’d confiscated our beers at Maseru hadn’t seen the bottle of whisky we had stashed in the food box. After a make-shift meal of baked beans and bread washed down with a bottle of Johnny Walker we snuggled into our sleeping bags and tried to get some sleep.

The next morning it was still raining but at least we could see where we were going. Progress was painfully slow. The road was so slippery that even the smallest gradient brought the Land Cruiser to a standstill. Packed to the fenders with clay the wheels spun uselessly without traction. We soon figured out that a rock thrown under the wheels brought about some momentum. Stockpiling a supply of rocks in the load-bin, we made our way up inclines by one driving, one placing rocks and one following behind to collect the rocks again and pass them back. The weather was relentless in adding to our misery. Within an hour we experienced anything from heavy rain, bright sunshine, howling wind and snowfalls. One minute sweating in shirtsleeves, the next shivering in beanies and jackets. Passing a small village, our rock placing-picking-packing was a huge source of entertainment for the villagers and they soon joined in the fun. We literally flew up the next few hills before they tired of the game and returned home. But we were now through the worst of it. Gradually the road became firmer and we made better progress.

We eventually reached Mokhotlong at about 3PM. Driving in low range had taken its toll on our fuel and after only 150km the fuel gauge was barely moving off empty. We cruised into town breathing a sigh of relief that we’d made it to a fuel supply. But this was Lesotho remember. It was now snowing quite heavily, it was Sunday afternoon and a long weekend. No one was expected to need petrol so the pump attendant went home. Monday was a public holiday so he would only be back on Tuesday! What now?

We decided to try the police station. They weren’t very sympathetic to our problem but a bystander came to our rescue and said he would show us where to find the petrol attendant. Where? Just nearby. How far? Not far. We don’t have much fuel left. No, it’s close, don’t worry. So off we went knowing that if we ran out of fuel now we’d be spending the next two days in rural Lesotho.

After a nervous few kilometres, we were instructed to stop. Our guide jumped off the back and disappeared down the embankment. We waited. Soon he came back followed by the petrol attendant and we made our way back to town.

The “fuel station” was at the airfield some distance out of town and consisted of an overhead tank powered by a hand-pump. With enormous gratitude we paid for the rather expensive petrol and thanked both the attendant and our guide with generous tips. It was getting late and snow was falling heavily now but we pushed on to try and get to Sani which was still about 50km away. Driving through the fresh snow with ice cracking under the wheels as we drove through puddles was a novel experience. Fortunately the road was in reasonable condition and soon we arrived at a bitterly cold Sani Top Inn where we found a roaring fire, a festive crowd and a dorm room with bunk beds.

Monday, the last morning of our adventure, dawned bright and sunny. Snowfall throughout the night had turned the area into a fairytale wonderland. Beautiful! But Lesotho wasn’t done with us yet. The cold had formed a layer of ice on the pass and it was impossible to go down till the ice had melted. Luckily it was a warm sunny day and by around noon we could proceed. Nervously following another vehicle who’s experienced driver guided us we managed to slip and slide our way down in relative safety.

We arrived back home late Monday evening with memories to last a lifetime. Like a strict school teacher Lesotho had instilled in me both love and respect. I’ve been back several times since but those first lessons have never been forgotten.

This time my visit to Lesotho had two main goals: To visit the remote Sehlabathebe National Park and to see the spectacular Maletsunyane Waterfall. These two attractions are at almost opposite ends of the country so, for the first time in almost 35 years I was going to be doing the whole route of 1984 only this time in reverse with a few diversions in-between. 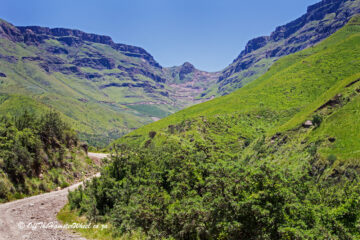 January 2019 Sani Pass Strictly speaking, Sani Pass is in South Africa and not in Lesotho but I’ve included it here as it provides the only access for vehicles into Lesotho from KwaZulu-Natal. Also, driving Read more…